Quoted By: >>676590
>>676569
>Cryofag immediately resorting to "entitlement" card
Anonymous
Quoted By:
>>676586
>NYOOOOO WHY PEOPLE FREEZE PRAETS THEY ALL BELONG TO ME LOOK AT ME I'M USING A MEME OVERCLOCK THAT MEANS ONLY I GET TO SHOOT STUFF
entitlement in pure form but obviously a guntard is too stupid to even process that
Anonymous
View SameGoogleImgOpsiqdbSauceNAO 1635214405091.webm, 3MiB, 1280x654

>Latest happenings:
Tyron has released a preview release for v1.17.0, alongside a recent v1.17.0-rc.2 for bug fixes in its unstable predecessor. All amendments and additions can be viewed on the website's devlog; the major changes encompass an improvement in water and ice interaction (water can now ignore any block in its corresponding block), instantaneous loading and general AI/ performance de-jank, lightning and lightning rods, further player model interactions, more animals (gazelles, brown/ black/ sun bears and fish), shield and grass variants alongside ground storage and item placement refinement.
Players are emigrating to unkown territories of the northernmost reaches of the map - Guacaville's incipient settlement imitates and challenges the 30k Southern stretch to Sumeria, establishing itself on the desolate wastes of the Northern pole.

>I'm new, where should I settle?
>Temenos
The town closest to spawn; it stretches from mountains to the South and North ends of the lake, to the West of the town. Being the oldest town in the server, it has an abundance of comfy historical builds joint together with comprehensive infrastructure. It's generally the optimal place for newcomers to find their footing within the game.
>Florida ( -600, 22000 )
An amicable civilisation reflecting the staple 'Souf' style of disarray. Rich in resources, it has a strong sense of community and comradery. Built between slate plains and redwood forests.
>Sumeria ( -17500*, 32200 )
The server's newest settlement. Built below and within an impressive granite mountain range, the town seeks to emulate Aztec and Babylonian architecture alike through floating gardens and ziggurats.

Quoted By: >>676613
>>676598
It makes sense in 2D but not in a 3D world I think. When going from pole to pole you have to pass through the equator. I'm probably explaining myself like shit but I hope you get what I mean. If you go north you skip the equator which doesn't make sense in 3D.
Anonymous
Quoted By:
>>676591
>Yeah but that map has no poles
that's good considering wigger's behaviour
Anonymous
View SameGoogleImgOpsiqdbSauceNAO file.png, 10KiB, 800x600

Quoted By:
>>676606
>It makes sense in 2D but not in a 3D world I think.
It is quite literally the same thing in this case.
We're on a square block grid looking at a square map. Vintage Story is already looping north/south but instead of actually truly looping its just generating an entire new world each time you cross a "pole"/equator. It's just two equators. Left/right also extends infinitely but you already normalize that from our IRL globe. 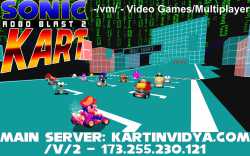 431KiB, 1280x800, vm op.png
View SameGoogleImgOpsiqdbSauceNAO
Quoted By:
SRB2 Kart is a mod of a mod based on the Doom Legacy engine, turning the game engine into a kart racer akin to Super Mario Kart. It's a very lightweight game and runs on most all PCs. Use this thread to start netgames, join other anons, give help/tips, spritework, modding, feedback, etc.

>How to Play (v1.3)
https://mb.srb2.org/showthread.php?t=43708
1. Download the game below in 'Full Install (...)'
>Compiling on Linux
https://wiki.srb2.org/wiki/Source_code_compiling/Makefiles#Compiling_on_Linux
2. Unzip contents into a separate folder
3. Load up 'srb2kart.exe'
4. That's it
>This looks like shit and it runs like shit
Get the Moe's Mansion/Birdhouse bootup. OpenGL supported.
https://kart.moe/moe-mansion/
https://mb.srb2.org/showthread.php?t=45324
170 posts and 44 images omitted
Anonymous
View SameGoogleImgOpsiqdbSauceNAO CameHeretoLaugh.jpg, 31KiB, 600x600

Quoted By:
>>676639
Again nigger, you're the only person who pays attention to tranny jewtube garbage, I think you're the only zoomer.
You linking autistic vids you like means nothing to the point at hand
>>676649
take your meds retard. If you could articulate yourself not like a 12 year old these kikekrew delusions will fade away
Anonymous
Quoted By:
>>676649
>literally tranny obsessed wojak poster who regularly rages at the childrens video game, both in thread and in game
lmao'ing at ur life
Anonymous
Quoted By: >>676658
>>676618
>taking their rings
You get at most two rings and thats fucking nothing since you spend three for anything more then the equivalent of a blue spark.
Anonymous
Quoted By:
>>676654
i think 2 rings is more than 0 in the A press scenario but im not sure
you are also taking those 2 rings away from someone so the net difference is actually 4
you dont have to like it but acting like holding A is 'more skill' is pure cope
Anonymous
View SameGoogleImgOpsiqdbSauceNAO nut.jpg, 41KiB, 800x450

Quoted By:
ggs bros, I had so much fun today and finally took the nitro pill. it clicked and it feels so good now that I am less of a shitter in that mode.
Anonymous 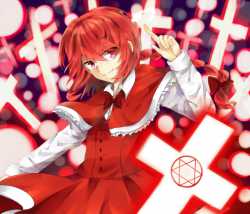 Download Soku here:
>Community pack, all necessary tools come preinstalled. Get this if you are new
https://mega.nz/file/U1InQIZR#8UGs8S9oXVeSAIr6fLhxaAaryBO67KEIuf13o2T399U
>Base game, not necessary if you use the above link
https://mega.nz/#!ashhnZza!cWdD2mqnQSfpzow5h_LDABQzHOnAiHDL62ceAOF6z9k
>Upgrade pack for the base game
https://mega.nz/file/RhQj0CbA#rC6Jf9gTJsByL2ox59KxFqShoweUX0J3MHpQJKvKaRI

Can't forward ports in order to host? Try these:
>Autopunch: Mainly for Soku, not necessary if you got the Community pack
https://autopunch.delthas.fr/
>Proxypunch: Compatible with more games, a bit less user-friendly
https://github.com/delthas/proxypunch 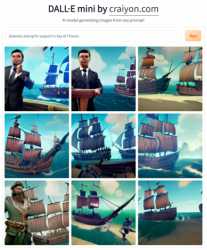 Quoted By:
>>676650
>I don't know why people are giving you shit, you play like how everyone i've ever encountered in this game.
>bully the weak revere the strong
Anonymous 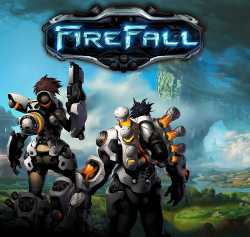 745KiB, 1000x948, MV5BMGM0ZjAyYWItNDE3Mi00MTA1LWIwMmYtYzFkMzIxZTMyNTQwXkEyXkFqcGdeQXVyNjIzMzU2NTU@._V1_.jpg
View SameGoogleImgOpsiqdbSauceNAO
Quoted By:
>Massive seamless world.
>Server has to constantly fight against the environment to push back the border and be able to explore more of the world.
>Archetype and class system.
>PvP and PvE in an MMOFPS.
What went wrong?
Anonymous

based class.
Anonymous
Quoted By:
>>663863
You're out of your god damn mind if you cannot see the decline in quality of literally everything and the rise of needed "diversity" face it a bunch of white and asian autists in a team working towards the same goal are the best creators on earth and honestly there is nothing wrong with it.
Anonymous 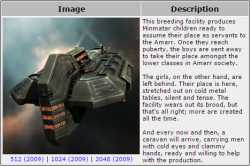 96KiB, 467x311, 1545534719188.png
View SameGoogleImgOpsiqdbSauceNAO
Quoted By:
>what is eve
mmo space sandbox
>what is eve really?
dead game
>ingame channel
/v/bros
>should I start playing EVE?
probably not
>patchnotes
https://www.eveonline.com/news/view/patch-notes-version-20-06
97 posts and 29 images omitted
Anonymous
Quoted By:
>put 0 skill alpha alts into NS blobs
>learn to sound like a female/use software
>hop into comms every once in a while, chat some random shit
>swim in ISK/assets from simp donations

This is how I fund my gameplay.
Anonymous
Quoted By: >>676486
>>676333
In high sec though? Or do you recommend LS/null?
Anonymous
Quoted By:
>>676325
I do solo pi in npc null and wh. Is pretty easy with filaments and an epithal. 1.8b per month per account and I do a bit of industry or skill extraction to even out Plex.
Anonymous
Quoted By: >>676642
>>676398
if you are asking, than you probably can't .
i'm 1 account player . make a living is no problem, i could afford to do solo kiting dread pvp back in the days every once in a while.
but now it's just pointless, everyone around is multiboxing turboautist flying with his 5 alts. and killboard check shows very clearly that you are solo, it's very easy to set up against you. You are literally the conten for everyone else . and if you get someone once, they take a note and make sure you are dead next time with no losses.
Arenas are also garbage , - same aderoll turboautists with all drugs ,iplants, cheesy shit you can't imagine would farm everyone else . But i guess first time arenas somewhat exiting.
And because there are no meaningfull updates for the game i see solo eve like a game for a year, you skill up, farm iskies , pvp and next year you realize that you hit the celling . you could probably make it for two years because of retarded skill training time , but after you would either go full retard mode with personal army or get bored
Anonymous
Quoted By:
>>676486
arenas are better now, although I despise the ffa format, but thats just because im sweaty
BeretDog 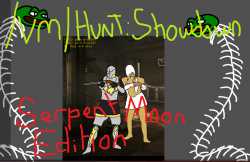 Join the /vm/ Hunt: Showdown Discord to find pardners (instead of blog posting about absolute nonsense you fucking mutt)

Remember, no one gives a fucking shit about your ASL, kill yourself for asking.

Be welcoming to our newfrends, we were all retarded before we started. 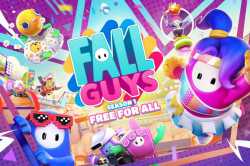 i personally love it right now
89 posts and 13 images omitted
Anonymous
Quoted By: >>676519
Everything good to get is locked. I'm not spending real money to unlock pixels for me to wear. Why do I even bother playing then? Especially all these 10-year-old shitters.

1MiB, 1920x1080, 2022-06-05_00.36.55 copy.jpg
View SameGoogleImgOpsiqdbSauceNAO
Quoted By:
A vanilla 1.19.0 server, pirated and cracked friendly for those who want to avoid Mircrsoft's ever worsening tactics.
The server is one of the oldest in 4chan history and has maintain an active player-base throughout the years and we're looking to get some new joins on to this lovely little map we call home.

>How to can I join?
Official and pirated clients can join in without issue. Users using free VPNs may be blocked due to Russian bots abusing it.

>what are you playing?
>what server?
>what race?
>what class?
>what level?
>what loot you got?
>why aren't you playing ranger?
19 posts and 3 images omitted
Anonymous
Quoted By: >>676180 >>676267
I made it to Level 35 in Project 1999 GREEN. I loved it. I want to join the new official TLP server called Yelinak but it costs $14.99 a month for a subscription. Why is Daybreak Studios like this?
Anonymous
Quoted By:
>>676163
Daybreak ruins everything they touch
Anonymous
Quoted By:
>>676163
yeah i played in mischief when it first launched and it was actually really fun. some people were a bit toxic and didnt comprehend not everyone was born playing everquest, but it was a solid experience. i dont wanna sub either so im on green right now.
Anonymous
Quoted By: >>676628
>>676127
A full mana bar on wizard is the most fun you'll have though.
Resource recovery in Everquest is probably the biggest hurdle to actually playing it. The games would not be anywhere near the time investment they are if mana didn't return at a dying snail's pace. You can call me a faggot or a casual or something, but Guild Wars 1 had decent resource management without turning the game into a shit awful downtime slog.
Anonymous
Quoted By:
>>676602
That’s why you have a proper party fitted with a battery.
Anonymous 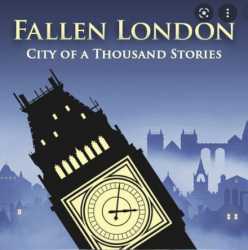