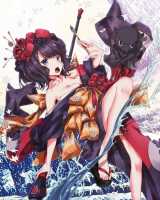 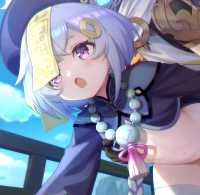 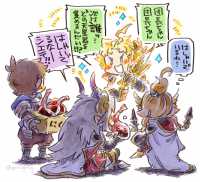 161KiB, 800x730, I don't know what they're saying.jpg
View SameGoogleImgOpsiqdbSauceNAO
Quoted By:
>Recent news
Vajra 5* Uncap available January 26th
Second Advent is now in Side Stories
Damabar to be added to the shop at the end of January
Masquerade class (Dancer EX2) and new cap Rank (300) both at anniversary.

>How to Start
Go to http://game.granbluefantasy.jp in any Chromium-based browser

>READ THE FAQ before posting - It will answer most of your questions if you're new or learning
https://gbf.wiki/FAQ

>Pastebin for utility links
https://pastebin.com/fyJRmtqM
611 posts and 133 images omitted
Anonymous
Quoted By: >>320989795
>>320988873
>BRAVO SAKURAI
But Scat is Nasu's abortion character. All her wank comes from FHA. They changed her design because she was originally a Rinface (so of course Nasu wranked her to high heavens).
Anonymous
Quoted By:
>>320989498
>Nasu's perfect
Says fucking nobody, they're both shit but Sakurai manages to be even worse.
Anonymous
Quoted By:
>>320989670
Wasn't she still weaker than Cu in HA before FGO retconned so she has some sort of second form now?
Anonymous
Quoted By:
>>320989498
Sakurai is just someone trying to be a Nasu. Call me whatever you want but FGO's overarching plot is garbage and was garbage ever since part 1. Human order, beasts and grands are terrible ideas and the game would be better if it was all about solving self contained singularities without a bigger threat outside of them orchestrating everything since the start. All the Marisbilly lore bores me to death
Anonymous
View SameGoogleImgOpsiqdbSauceNAO 20210115_150915.jpg, 3MiB, 2508x3541

>News
- Zendikar Rising is out, along with customizable emotes and stickers
- Kaldheim releases January 28th along with early access cross-platform mobile play for certain Android devices
- After that, we're going Strixhaven: School of Mages (Elite magical university with five colleges battling each other with their own takes on magic), Dungeons & Dragons: Adventures in the Forgotten Realms (Standard set in the Forgotten Realms) and then two Innistrad sets, the first more devoted to Werewolves and next more devoted to Vampires (with some sort of vampire wedding), separated by 3 months each
- Zendikar Rising Championship won by Brad Barclay (Azorius Control, Scotland, He)
- Kaladesh Remastered is out with 300+ new cards for Historic
- Omnath, Locus of Creation is now banned in Standard and Brawl and suspended in Historic. Escape to the Wilds and Lucky Clover are banned in Standard. Teferi, Time Raveler and Wilderness Reclamation are properly banned in Historic. while Burning-Tree Emissary is unbanned.
- Zendikar Rising Traditional and Premier drafts going on until January 21/28
- Zendikar Rising Quick Drafts going on until January 15
- Card Styles are offered for players that play a ranked game in Gold (Relic Axe) and Platinum (Throne of Makindi) rank
- Full mobile release, including iOS, is planned for later in the year

>Thread Question
Are you hyped for Kaldheim at all?
462 posts and 80 images omitted
Anonymous
Quoted By:
>>320988101
jej
Anonymous
View SameGoogleImgOpsiqdbSauceNAO file.png, 1MiB, 672x936

Quoted By: >>320989282
>>320988252
What blue runestone? Comfy Runestone is colorless. There is only 1 blue artifact revealed so far in KHM.
Anonymous
Quoted By:
>>320989162
Rune of Flight, it's an aura with rune subtype.
Anonymous
Quoted By:
>>320954697
so this all but confirms Phyrexians within the next 2-3 sets right?
Anonymous
Quoted By:
18/20 mythic revealed, one of which is going to be a black creature with foretell
50/63 one of which is going to be a red god and another two which are going to be a tranny sagas and a tranny sorcery that scales with snow so don't get your dicks up for something good.
From uncommons there are
2 dual colored legendaries (troll/gruul and human/human most likely)
2 black lands enter that trapped and do shit when sacced with another color
2 sagas s*mic and orzhov
1 equipment that enters with a token attached with it when kicked which is bound to be shit
4 runes assuming they didn't cut the cycle

Quoted By:
Anyway I came here because now that I updated my OS I have a problem with running curses and I hoped you guys would help me out
Because I tried understanding what the heck the problem is and installed 50 different packages after reading from stackoverflow but this shit just ain't working

>>320989602
El Gordo Grande has been on a power trip for so long now it's become a power world tour.
Anonymous 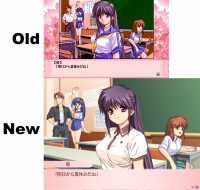 >Having trouble with your VN? Try the following before you ask for tech support:
1. Be in Japanese locale
2. Read the Readme
3. Read the wiki below
4. Copy error messages with CTRL+C and paste them with CTRL+V into a translator.
5. Look it up in your preferred search engine

>Need a novel with a specific element?
http://vndb.org/g

Quoted By:
All these Higurashi spoiler tags are making me regret not taking months just to play through half of it before my computer stopped working
Anonymous
Quoted By:
>>320987568
I can understand anything a fucking eroge writer of all things can write, they’re far from being intellectual people
If you could choose to only have sex with one single girl I would’ve read it, in fact I think I’d read it if at the very least you weren’t forced to fuck the disgusting lolishit characters
Anonymous
Quoted By:
>>320988934
Ah shit, Kokonoe has a VN
Anonymous
Quoted By:
>>320987934
I don't really dislike SoL, I even liked almost all SoL in FSN, since the characters were appealing. But here I'm basically watching a group of children playing games and innocently teasing each other. The characters are naturally simplistic in their childishness. And neither the protagonist nor the story progression nor the writing itself manages to compensate this lack of complexity or interest up to this point.
×