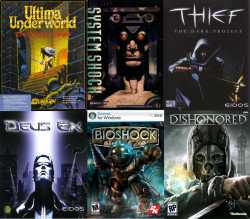 Quoted By: >>160930
>>160851
It's absolutely baffling.
Especially considering there is a UU clone developed by one guy that apparently beats the everliving shit out of UA. At least according to the alpha testers on rpgcodex.
Anonymous
Quoted By:
>>160802
>>160851
>>160906
It probably happened because a lot of these people have done fuck all in the industry for like two decades Problems with the game are largely technical incompetence.
Anonymous
Quoted By:
>>150637
>Is the enhanced version of system shock 1 good or should I play the original?
original controls are dodgy.
EE just adapts them to modern standards.
play ee
Anonymous
Quoted By: >>161293 >>161500
>>146506
dishonored is like thief, but good and not aged like shit
Anonymous
Quoted By:
>>161136
Thief has some fan stuff that's aged a bit better, but it's definitely not held up the best. A lot of the impressive shit it did is pretty rudimentary these days, and it's super fucking easy. Cool atmosphere and maps still though, and the fact that shit like dark mod exists at all is pretty incredible to me.
Anonymous
Quoted By:
>>161136
Thief holds up better than Dishonoured in a lot of ways for me. Pacing, opting for intricate locales rather than sprawling ones, Dishonoured is closer to "Thief: Deadly Shadows but not shit".
Anonymous
View SameGoogleImgOpsiqdbSauceNAO daggerfall map.jpg, 160KiB, 768x457

Quoted By:
>>149699
>>149664
Imsims are about immersion, sure skyrim has interactivity but it's world isn't believable due to ludo-narrative discrepancies caused by invoking too much of the TES universe into the game, the devs didn't have the money and manpower to build it's world WITH it's game play.

A Skyrim which is heavily modded with new game mechanics can be an immersive sim.


For example skyrim is a nation with 5 cites that occupy a fraction of a territory of 36km2 it's "urban" and national population correspondingly are ridiculously small.
The city of versailles is nearly as big as the nation of skyrim with it's 26km2, that's not normal what's even less normal is the fact that Tamriel is equal in size to 6 or 7 of Yvelines department 259 communes.
Yveline department is 1 out of 104 that compose france.

...Death on the Outsider on the other hand feels very castrated. There is no chaos system, no lethal/nonlethal disposing of targets with exception of 1. Fewer abilities and levels are kind of average, with the exception of bank heist level, which is pretty fucking good.
Anonymous
Quoted By:
>>162901
Dishonored 2 is better at least gameplay wise. AI's smarter, new gameplay stuff allows you to play loud non-lethal and do stupid shit like running around throwing bottles at people. Story wise I felt more inspired by the first one, it also had better attention to detail, for example the heart gives you generic lines about Karnaca for most levels unless you're aiming it at someone in particular, but it's still decent. The ending little narration in particular which i was looking forwards to was underwhelming when compared to the original.
×